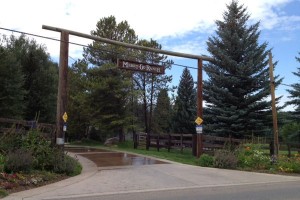 ASPEN—Merry-Go-Round Ranch, the home of Aspen retail and diner entrepreneur Leonard “Boogie” Weinglass, is on the market for $28 million. The 21-acre property on McLain Flats could be described as a sports nut’s dream. A 13,000-square-foot fitness facility includes an NBA-caliber basketball court, indoor track, and tennis court. Then there’s the land, which includes a barn, horse pastures, and unparalleled views of all four ski areas and the area’s major peaks. Including the gym, the house totals nearly 21,300 square feet. “It’s an incredible piece of real estate,” said listing broker Joshua Saslove of Joshua & Co. Only 10 properties in the Roaring Fork Valley are listed for more than the Merry-Go-Round Ranch, according to a search of the Aspen/Glenwood Multiple Listing Service. And there’s been a few high-profile, high-end sales in the greater McLain Flats area. Saudi Prince Bandar sold his Starwood ranch with its 56,000-square-foot home and an adjoining property for $49 million in June to hedge fund boss John Paulson. The buyer apparently liked the neighborhood; Paulson had bought a spec home above McLain Flats for $24.5 million in June 2010. His neighbor includes Paul Edgerley, a managing director at Bain Capital, who bought a Starwood property for $19.5 million in February 2011. Weinglass is a well-known local retailer and restaurateur. He owns the building in which his Boogie’s Diner and clothing store operates; recently he turned over the diner to two young men who own Aspen Over Easy, a breakfast joint on Hopkins. And he has opened a handful of spinoff retail operations over the last few years in downtown Aspen. Weinglass told The Aspen Times in May that his impetus for letting go of Boogie’s Diner was that he wanted to travel.